Walking on a Dream (Single)

Edit
watch 01:25
Jurassic World: Dominion Dominates Fandom Wikis - The Loop
Do you like this video?
Play Sound
Walking on a Dream 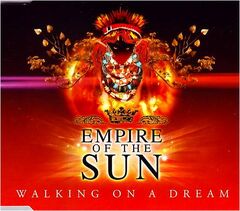 'Walking on a Dream' Is the first single from Empire of the Sun's debut album of the same name. The song reached #10 on the Australian ARIA Charts and certified Platinum, Also reaching #4 in Triple J's Hottest 100 in 2008. The song won Single of the Year in the 2009 ARIA Music Awards and named Single of the Week on iTunes in April, the same year.

The Video was filmed in Shanghai, China in July/August 2009 and feautures Steele and Littlemore in Emperial garb and Make-up.

The bulk of the video consists of both band members singing to the camera in a crimson room, with confettii and slow motion effects.

Other aspects of the video include Steele performing acts of Divination unto his bandmate, whilst roaming the Oriental Cityscape. The clip ends in an ambient, rubble-surrounded area, with a silent Steele poised on a small Bicycle while Littlemore lies motionless at his feet.

(Write about the tracks here! - you know Citizen, you can use tables for such things?)

(Click here for the Walking on a Dream lyrics)