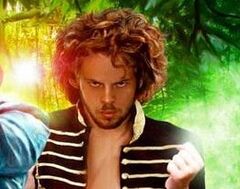 Nick Littlemore (Lord Littlemore), birth name: Nicholas George Littlemore, gave birth to the concept of the Electropop-duo band Empire of the Sun and invited Luke Steel to join him on the journey. Nick is also the frontman of his own Australian dance music band PNAU. He shares the title of song writer and producer together with Luke Steele in the Empire of the Sun band. He is currently working with Luke and Peter Mayes on their second album. Nick and Peter Mayes {PNAU} are enjoying the acclaim surrounding their latest project Elton John V PNAU which opened in the UK at number 1 [July 22nd 2012] for the album "Good Morning to the Night" and the title track of the same which has been selected as one of the songs on the album for the 2012 London Olympic Games.

About: Nicholas George Littlemore was born in Sydney, Australia on May 6, 1978. He is close to his two brothers. His older brother named Samuel David Littlemore is a successful musician and record producer who performs under the name Sam LaMore. Nick has performed vocals on some of Sam LaMore's songs. Most recently, he lent his vocal talents to Sam LaMore's latest hit "I Wish It Could Last Forever." He also has another older brother named James Alexander Littlemore who is a hit film director and has directed many many of the videos for Nick's many musical projects. James also did the final editing on the highly acclaimed video "We are the people"

Nick began writing and performing music when he was 10. He graduated from Barker College, a high school located in Hornsby, a North Shore suburb in Sydney, New South Wales, Australia) in 1996. Littlemore attended College of Fine Arts at the University of New South Wales and never quite graduated with a degree in Digital Media. He instead flew to London on a whim and saw the other side of the planet for the first time, it was here he would later reside and work with huge stars such as Sir Elton John and Robbie Williams, but at this stage he was just a little tike, struggling with his place in the universe, living in a tiny flat on brick lane in London's trendy East Side...........he currently lives in New York when he is not traveling ....... more to come...

Early stages with PNAU and other bands[]

Nick throughout his years created the art-rock-punk-dance band Teenager with "Pip Brown" also known as Ladyhawke.
Because of his work with the band Teenager, Nick had also some smaller associated acts with Pip Brown's newest band: Ladyhawke.

In 2000, Nick was introduced to Luke Steele (from The Sleepy Jackson) in a bar because of Steele's A&R executor, and they became close friends and decided to make a music project together, which formed the single "Tell the Girls I'm Not Hangin' Out" which was included in The Sleepy Jackson's debut album Lovers in 2003.
Nick then decided to include Steele in his album by making him featured in two songs, Freedom and With You Forever.
After the work on the PNAU singles, Littlemore got fascinated by Steele's way of working and stated on PNAU's official website that "...working with Luke Steele... it was amazing, that inspired [me] to work on a separate project with him all together. It's another album we're doing."
and that's how the creation of the band Empire of the Sun began.

The rise of Lord Littlemore[]

To find info about Nick Littlemores private life is not that easy, we have no information of his parents' names, but we know that he is recently married.