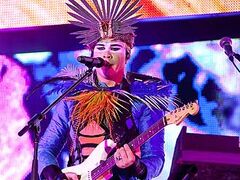 Luke James Steele, (Emperor Steele) born 1979 in Auckland, New Zealand,
is currently the main vocalist and song writer in the Electropop-duo band Empire of the Sun, aswell as in his own first Alternative Rock band The Sleepy Jackson.

Luke Steele was born in Auckland, New Zealand under the name of Luke James Steele in the year of 1979, December 13th.
Luke was born in the arms of a loving, musicially talented family, his father, Rick Steele is a blues guitarist aswell as a harmonica player.
Because of his father, Luke became a musicially talented child, and started his first real band at the age of 19 in 1998, called The Sleepy Jackson.

All this did not only affect him in a positive way, but also affected his brothers and sister aswell:

his sister, Katy Steele is the vocalist of the perth indie rock band called "Little birdy".

Luke Steele's other brother Jesse Steele was already an original member of The Sleepy Jackson band since 1998,

and Luke Steele's first brother Jake Steele, also joined Luke's first main band The Sleepy Jackson in 2008, and was mixing and playing computer samples for the band, but now plays for another band, also a Perth band, called Injured Ninja.

Because of his fathers intresse in music, he helped his children to go toward a dream of becoming musicians, which they all did succeed.

Early stages of Luke's musician career in The Sleepy Jackson:[]

Luke was the one who got the hard grip on his music career first, and became well known in Australia after the debut album Lovers of his first and new band The Sleepy Jackson.
Luke and the members of the group got pretty good attention, and people in and beside Australia aswell as in Europe (such as UK and France aswell as Sweden) bought their albums constantly, which made it succesfull for the group to make one more album called Personality - One Was a Spider, One Was a Bird, scoring 2 albums in 3 years.

The Sleepy Jackson succesfully peaked the charts with their first album Lovers, landing on the #21 place at the Australian list, #69 place in the UK, and the 117# place in Sweden.
Even though they scored pretty good charts on their first debut album, they scored even better with their second album Personality - One Was a Spider, One Was a Bird, landing on the #10 place in Australia and on the #42 place in Sweden.

The group saw a bright future ahead of them, even though some of the groups main and original members needed to departure through the time, they wanted to keep on going.

Luke then got featured in one of Australias most famous bands Pnau (members: Nick Littlemore, Peter Mayes) where he got featured in a song called "With You Forever".
Luke gave such a strong impression on the group, that one of the members, Nick Littlemore stated on Pnau's official website that: "...working with Luke Steele... it was amazing, that inspired [me] to work on a separate project with him all together. It's another album we're doing." and as quickly as that Luke became a part of the newly started band "Empire of the Sun" leaving "The Sleepy Jackson" in a still-active "Pause-state".

The rise of the emperor:[]

When Luke Steele joined forces with Nick Littlemore the creation of a band called "Empire of the Sun" began.
Who knew that the band would be the beginning of an empire, whose journey would gather millions of loyal citizens that would follow the empire's every single step?
In the early 2008, the works on the first two singles began and the future of the empire began to be written.
The first song "Walking on a Dream" got a huge success, and topped the charts from #64 (UK Singles Chart) up to #6 (Billboard Hot Dance Singles Sales) making it a huge success in both Australia, and the rest of the world.

The followup to the debut single, came We Are the People in 2008, which became very often played in some parts of Europe, and made the Empire now officially internationally famous.

Singles like "Standing on the Shore" , "Without You" and "Half Mast (Slight Return)" became available throughout the years of 2009 and 2010, all from the same album "Walking on a Dream"

What helped the empire to gain such success was their way of mixing the style of theater, art and space into one single mix making their music videos, music, and clothing look very "out of this world", special and symbolic.

Because of their way of forwarding their music through their artistic styles, the main members gave themselves nicknames which are now well known in every single Empire of the Sun fan's ears.
Luke Steele was crowned with the name of Emperor Steele,
and Nick Littlemore got crowned with the name of Lord Littlemore, giving the band yet another feeling that the band is not only a band, but an empire.
and the rise of the emperor was fullfilled, with thousands (or milions) of citizens (fans) following their every move. (Read more about the whole Empire of the Sun here.)

Luke Steele is engaged to his fiance Jodie Steele, nicknamed "Snappy Dolphin".
Jodie was featured in both works of The Sleepy Jackson and the Empire of the Sun, such as the single "The Art of Driving" which was included as a bonus track in the Empire of the Sun vinyl and iTunes release of the single "Standing on the Shore", meanwhile she also joined and toured before with The Sleepy Jackson in 2008.
Jodie and Luke have been engaged since 2006 and they got their first child in July 2008, they named her Sunny Tiger (Steele).