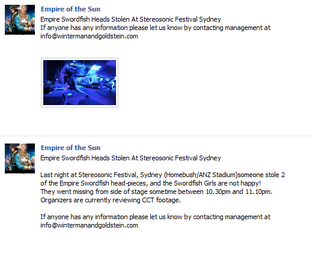 The swordfish girls are not too happy!

Today the Empire announced through their official Facebook page that 2 of the Empyrean headpieces for the Swordfish girls were stolen.

According to the post, the stealing happened between the hours of 10.30pm and 11.10pm on the Stereosonic Festival in Sydney Australia.

To try to retrieve the headpieces, the organizers of the festival are right now reviewing the footage from the show to try to find clues & answers to this strange act of crime & mysterious dissapearing.. (it's not easy to steal something that you can't put under your shirt without getting noticed.)

Not only trying to find clues & information in the reviewing of the footage, the Empire now asks for clues and information from people who might have spotted anything strange that might give yet another clue to solve this case & retrieve the missing headpieces.

If you yourself have any information, don't doubt it! contact the managment right away at: info@wintermanandgoldstein.com

It's very important that the headpieces returns to the Empire. The Swordfish girls are one of the most symbolic characters in the Empiverse ever & they need to continue the great Empyrean journey together with Emperor Steele!

We hope the headpieces will be found & retrieved soon!