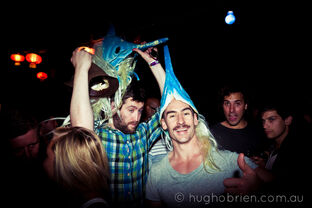 Now we know how they look... now let's bring justice!

Hugh O'Brien, captured the faces of the thieves who stole the 2 Swordfish Headpieces we wrote about earlier !

The Empire now asks it's citizens for help: "Contact the managment team as soon as possible if you know who these two people are!"

The masks need to be returned in time for the Stereosonic Festival at Melbourne, Australia because the show can loose half of it's magic if two of the swordfish dancers will be unable to perform.

Do you have any information who these two people are, please contact the email below:

We hope the headpieces will return to the Empire before the show! because ...the show must go on!

Best wishes from Empire of the Sun Wiki!

Yet another photo of the guy to the Left of the original picture.

Yet another photo of the guys on the original picture.
Community content is available under CC-BY-SA unless otherwise noted.
Advertisement