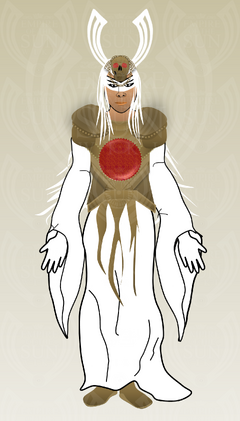 Empyrean Geisha Leader is the unofficial name for the costume, which was made for Emperor Steele to wear on the Empire of the Sun 2011 Live Tour.

The Empyrean Geisha Leader costume was first introduced in 2011 when Empire of the Sun started off their second tour, at the Ultra Music Festival, which occured 25th March 2011 in Downtown Miami, Florida (USA).

The costume is worn at the end of each live 2011 performance, where Emperor Steele performs Walking on a Dream.

The design of the costume is not only empyrean but also magnificent, including many new features:

The costumes headgear is a reproduction of the Standing on a Shore headgear, with new never-before-seen features added, meanwhile elder features got removed. The headgear resembles two white horns, in each horn there are two spacings giving the headgear greater detail. In the middle of the headgear/horns, a golden skull with shining red eyes has been forged in (which may be a shoutout for "Día de los Muertos" which was once featured in the We are the People music video), chains are seen going out from the skull and beautifully wrapping themselves around the horns. Emperor Steele uses this Headgear together with a long white wig.

The Empyrean Geisha Leader costume's outfit is a completely new addition to the Empyrean wardrobe. The outfit resembles a long white kimono made out of soft white fabric. A golden west is worn with quite large golden shoulder pads, golden "tentacles" are seen going down from the west covering a part of Emperor's stomach as well as legs. In the middle of the west a red/orange ball has been forged in, representing the sun. The "sun" is sticking out quite a bit from the west showing off that it's round in a style of a ball. The backside of the whole outfit, has white weave attached to it, the weave somehow resembles hair and can be mistaken to be a part of Emperor's long white wig.

White gloves and golden shoes are worn to complete the outfits look.

Retrieved from "https://empireofthesun.fandom.com/wiki/Empyrean_Geisha_Leader_(Costume)?oldid=5727"
Community content is available under CC-BY-SA unless otherwise noted.